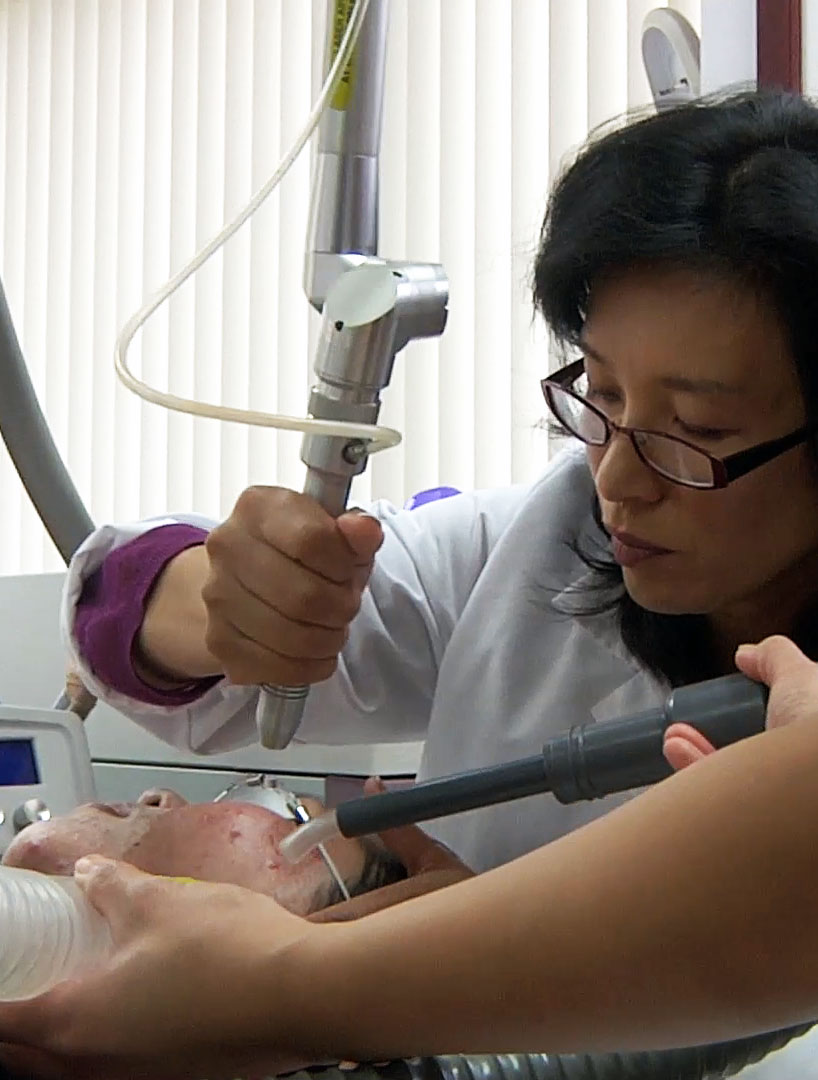 Photorejuvenation is a skin treatment that uses lasers, intense pulsed light, or photodynamic therapy to treat skin conditions and remove effects of photoaging such as wrinkles, spots, and textures. The process induces controlled wounds on the skin, prompting it to heal itself by creating new cells. This process reverses the signs of photoaging to a certain extent by removing appearances of damage. The technique was invented by Thomas L Roberts, III using CO2 lasers in the 1990s.

Skin rejuvenation can be achieved through various modalities including: thermal, chemical, mechanical, injection, and light.

Laser resurfacing is a laser surgery technique that disassociates molecular bonds. It is used for the treatment of wrinkles, solar lentigenes, sun damage, scarring (acne scars and surgical scars), stretch marks, actinic keratosis, and telangiectasias. It can be combined with liposuction to help tighten and smooth over the new contours after removal of excess fat. Resurfacing can be ablative, which vaporizes tissue and creates wounds, or non-ablative which keeps the skin intact. When compared to a chemical peel, dermabrasion or other forms of treatment, a laser allows the surgeon to customize the surgery not only for each patient but also to each area of the face.

Laser resurfacing is usually done with a 2940 nm Er:YAG laser or a 10,600 nm CO2 laser. Complete resurfacing was first done with a CO2 laser. Both Erbium and CO2 are used to treat deep rhytides, sun damage and age spots. Through the heating of the deep dermis, fibroblasts are stimulated to form new collagen and elastin helping to bring increased turgor and thickness to the skin. A variety of modes have been developed including Nd:Yag lasers and a plasma device. CO2 resurfacing has been shown to have an increased risk of hypopigmentation and scarring than erbium lasers. This is due to the high degree of coagulation and thus heat production that occurs as a nature of the CO2 wavelength.

Fractional Laser photothermolysis (FP) is a form of laser based skin resurfacing commonly used now, with several devices on the market. A fractional laser delivers tiny pinpoints of laser light to a part of the skin. Hundreds or thousands of laser pinpoints may be used per square inch, leaving healthy skin between the ablated areas, to allow more rapid healing and lower risks. FP may provide similar results to CO2 laser resurfacing without risk of scarring or significant downtime. Complications observed in a study of 961 treatments included acne and herpes outbreaks and were temporary. There have been, however, anecdotal negative accounts of bad scarring and hyperpigmentation without any findings of infection. Erbium and CO2 fractional systems have a better safety profile than lasers of the past.

Beginning in the late 1990s, a number of studies have been performed to evaluate the safety and effectiveness of IPL on wrinkle-removal and rejuvenation of the skin. One such study conducted by a group of four researchers from the Weill Cornell Medical College of Cornell University in 2004 found IPL to be a “non-invasive, non-ablative method for rejuvenating photoaged skin with minimal adverse events”.

Studies have noted that exposing cells to direct heat can cause DNA damage not only in those cells but also in surrounding tissue that was not directly exposed, and concluded treatments can cause microscopic thermal injuries and that further research is warranted.

IPL has become a popular treatment and is effective for pigmentation and telangiectasias, but has lesser results for wrinkles. The procedure is quick, relatively safe and well tolerated.